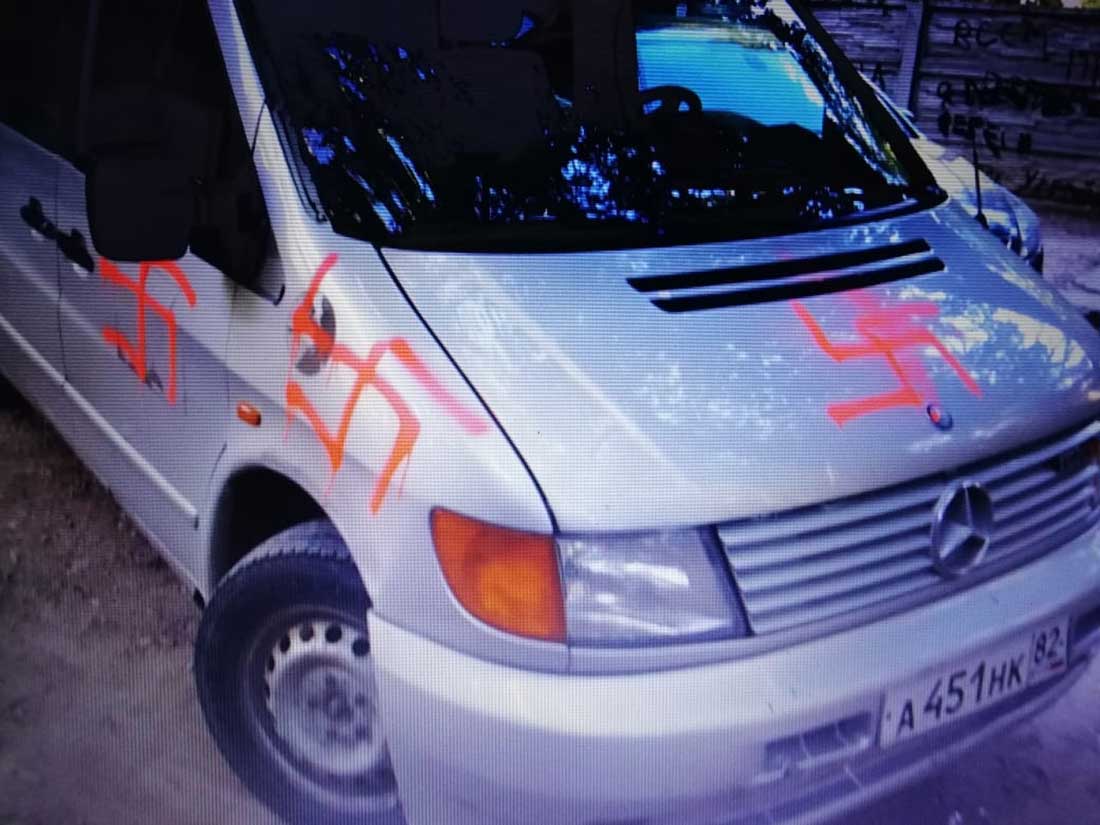 “My mom and younger brother have been living in Israel for twenty-five years. And three years ago, my elder daughter also moved there, to study under the NAALE program. By the way, you also helped her in this move. And this year my younger daughter will be traveling according to the same program. And I, practically remain here completely alone. But the main reason for leaving is because of my daughters. They both like Israel very much. The elder is finishing her studies this year and goes to serve in the army. And the younger is already waiting for it to be able to study and live there. But, for me, it is very important to be close to them in order to support them. Previously, I had an interesting job, I worked in an Italian restaurant, then in a Chinese restaurant. I was in great demand as a specialist for the opening of many restaurants in Feodosia.”

“In addition, I have a family, a Russian wife, her parents are here and all her relatives. And naturally, there was no question of moving. But six years ago, my wife left me, went away with a younger and wealthier man. The elder daughter wanted to stay with me, she was then twelve years old, and the younger with my wife. Three years later, the elder daughter went to study in Israel, and I was left in the apartment all alone. But I had a lot of work, and I came back home only in the evening. But then the younger daughter started talking about Israel. I began to seriously think about moving. And almost two years ago, I got married a second time. And my wife gladly supported me in this decision. But, unfortunately, four days before our trip to the consul, her mother severely broke her leg. And there was a very complex refraction with displacement. And my wife was forced to stay to look after her mom until she could take care of herself. But we hope that in three months, she will be able to come to me to Israel.”

“As soon as my younger daughter announced that she wanted to follow her sister to Israel, I realized that I also needed to be there. And as confirmation that I made the right decision, a small incident happened a year and a half ago. I went in the morning for a walk with my dog and froze from what I saw. My car was painted on all sides with a fascist swastika. The car is silver, and the spray paint is bright red. Many people know me in our city. I participated in the opening of six restaurants in Feodosia. And in the late nineties, I was on a TV program where I shared my cooking skills with people. And since childhood, I have not experienced great difficulties associated with my Jewishness. But now, I think that in fact it is time for me to leave. But also, economically, it becomes difficult for me here. Last summer and the summer before last, I helped launch two restaurants. I have developed everything, from the interior to the menu, completely. But none of them has accounted with me yet. Therefore, for two years now I have not undertaken this work. And my pension is only just over a hundred dollars. Living on that kind of money is not easy. In principle, I don’t need much, I also earn extra money at home, bake cakes and gingerbread for people. But I understand that I will be greatly needed by my daughters, there in Israel.”

“I do not need much. Despite my age, and I am already 64, and the fact that I am without one leg, I am not afraid of physical labor. Just recently, for an experiment, I decided to work for a month in one cafe, where I had to do very different work, up to washing dishes. And I coped with this work quite easily. I am not afraid of any work, the most important thing for me is to get on my feet quickly so that I can help my children. The main thing for me is to see their success in life, and this is most important.”

“As I said earlier, in my life there were no problems with anti-Semitism. At the age of eight, I was hit by a car and left without my right leg. But despite this, I always tried to live a full life. I had a very good relationship with my friends and classmates. I even managed to play football and hockey with them. This area (where I lived) was considered as one of the most hooligan areas. But the guys never hurt me. Sometimes we took off climbed over the fences of pioneer camps and put on a small “show”. One of my friends took a large cobblestone and threw it on my right leg, and the foot of my prosthesis was made of rubber. Sometimes I could pretend that I had endured the pain, as it were. And for this we collected ten kopecks (Russian cents) from each person. But after leaving school I went to Leningrad to enter the textile institute, to the faculty of modeling outerwear. They only looked at my documents and didn’t let me take the entrance exams. The fifth column [where it shows nationality as Jewish in the passport] did not give me the opportunity to enter. But I, without thinking twice, and went to the restoration school. This subject was not new to me, because I graduated from our art school at the Aivazovsky Museum. After graduation, I went to work in the theater, as a decorator. And entered the theater institute. And I got the rank of deputy director for artistic production. But then I entered the trade institute, the faculty, as the organizer of public catering. After that I worked as a restaurant director. And wherever I was and whatever positions I held, I always loved working with my own hands. And people saw that I, being disabled- studied a lot and worked a lot with my own hands. And people respect me for that. There were, of course, isolated cases when someone said something stupid about my nationality, but I always tried not to pay attention to it, or to turn it into a joke. I tried never to get angry with such people, although it was very unpleasant at times. But this was very rare. But what was done to my car a year and a half ago, I have never experienced before in my life. Yet I just try not to get angry with people. God will figure it out, without my help. And my parents went through quite a few difficulties in this matter, I do not know the details, but I know that there were cases at their jobs when others humiliated and spoke negatively about their Jewishness. Dad even had to quit once because he got into conflict over this. I suspect that my grandfather also had to go through many difficulties associated with his Jewishness, but I also do not know the details about this. I remember one thing that somehow, he came to us very upset, and said that we all need to pack up and leave. But later, he never said anything about the move again.”

“To be honest, nothing feels difficult about this move. I have moved a lot in my time. I studied, lived, and worked in Leningrad for a long time. Later, I moved to Krasnodar, then for several years I lived and worked in Kyrgyzstan. Therefore, it is not the first time for me to leave something and move somewhere to a new place. In addition, almost all my relatives are in Israel. And in three months, if everything goes well, my wife will come to me too. And in September, the younger daughter will arrive.”

“Many thanks. Your help was very essential for me. I never thought that with my knowledge and experience, no one would need me here (in Russia). Probably my age also matters. I’m 64 now, and people need younger ones. Thank you very much for helping my elder daughter, and my younger one too, you helped with plane tickets to Moscow for consular checks. All this is very important to me. Without your help, it would have been very difficult for me.”