During the Holocaust, Olga’s grandmother and aunt were buried alive in a mine in Donetsk, Ukraine. Her husband Alexander is an invalid and was sent home to die by the Ukrainian doctors who had done basically nothing to help him. The couple’s greatest desire was to join their daughter in Israel and get better medical treatment for Alexander. But they had lost all hope.

Then one day Olga was at the Jewish Agency and was told that an organization called Ezra International could help her. Olga said: “When I heard this I didn’t believe it at first. I called, and they told me that they would help us. The process took about two months. In fact, I’m still in shock that everything worked out.”

Today, Olga and Alexander have joined their daughter in Israel. “I have no words to express how grateful I am to you” said Olga. She continued; “In fact if it wasn’t for your help, we could not have left. You are wonderful, kind and open people.” 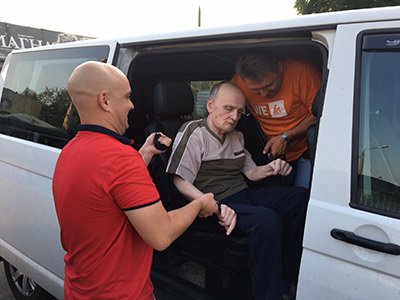